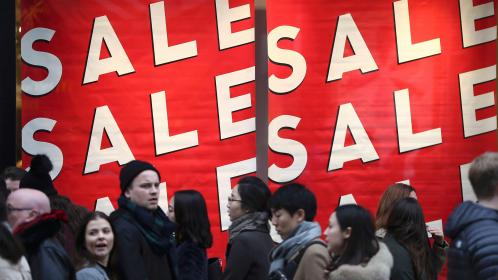 Retailers have reported the sharpest rise in retail sales volumes since September last year as Black Friday discount sales and Christmas shopping bring a positive end to the year for Britain’s high street.

In spite of rising inflation and increased economic uncertainty, the CBI survey of retailers and wholesalers found that a balance of 35 per cent reported a year-on-year increase in retail sales volumes in December.

The survey covers the Black Friday discount weekend in last week of November — a key date for retailers since the Thanksgiving tradition was adopted in 2013 — as well as the first two weeks of December.

Howard Archer, an economist at IHS Markit, said that the figures pointed to “consumers splashing out in the run up to Christmas, thereby maintaining a strong fourth quarter performance and boosting hopes that GDP growth has held up well.

“Retailers will certainly be hoping that consumers’ willingness to spend holds up over the final part of the vital Christmas shopping period and into the New Year.”

Retailers also reported a rise in spending by tourists due to the drop in the pound.

The CBI said that the growth was seen across all sectors of retail, with a particularly strong performance among clothing stores and grocers. Internet sales rose at their fastest pace since November 2014.

The CBI calculates its balance figure by taking away the percentage of retailers who saw falling sales from those who reported a rise, with 51 per cent reporting that sales volumes were up and 16 per cent saying they were down.

However, despite the positive figures, the CBI said that it expected sales to slow next year as the weaker pound pushed up the price of everyday goods and services and put a squeeze on household incomes.

Ben Jones, an economist at the CBI, said: “While we still expect to see decent growth in the near term the pressures on retail activity are likely to increase during 2017 as the impact of sterling’s depreciation feeds through. With higher inflation beginning to weigh on households’ purchasing power, consumption patterns are likely to shift, creating winners and losers across the retail landscape.”

The CBI’s index for expected sales growth in January dropped to a three-month low of 18 per cent and retailers expect orders with suppliers to slow sharply after growing at their fastest pace in more than a year in December.

James Knightley, at ING, said that consumers might be spending on big-ticket items now in anticipation of prices rising next year. The Bank of England consumer price inflation expectations among households in the UK has jumped to the highest level since 2014.

Mr Knightley said: “Inflation expectations have jumped in response to warnings from industry groups and individual companies that the pound’s collapse means higher costs that will likely be passed on to consumers. This is going to squeeze household spending power and may be partly responsible for the recent run of strong spending – people bringing forward purchases to avoid higher prices.”

Official retail data last week showed a slowdown in sales growth in November, though this mostly reflected a fall in fuel purchases, which are not included in the CBI data.