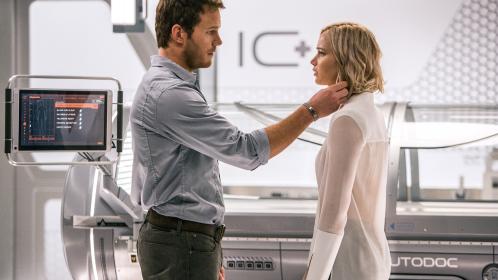 What with Gravity, Interstellar, The Martian and now Passengers, cinema of late has developed quite an interest in the hazards and potential loneliness of space travel. Zeitgeist watchers will have various ideas about what these films say to us in our present age of insecurity, but in Passengers, one particular concern seems to haunt the story. How will we cope when everything is automated and there’s nobody at the end of a phone line to talk to when something malfunctions?

A science-fiction version of this predicament is what faces the hero of Morten Tyldum’s film in its opening scenes. Jim (Chris Pratt) is one of 5,000 passengers on a starship heading for a colony planet, and, because the journey is going to take 120 Earth years, he and all the others have been put into suspended animation. When a glitch causes him to wake 90 years too soon, with no obvious way of returning to hibernation, he’s in trouble. The crew can’t be woken, and his only immediate source of information is customer-service software that isn’t programmed to recognise his problem. As technical hitches go, this one is rather bigger than forgetting your password. He’s facing a life sentence on a spacecraft, entirely alone.

Well, his solitude ends when another passenger, Aurora (Jennifer Lawrence), wakes up, but this brings a new difficulty. While using his abundant free time to woo his new acquaintance (turning the film briefly into a sort of Groundhog Day in space), Jim keeps a secret from her, and it’s not one she’s going to like. For a while, the space-flight stuff is put to one side, and we seem to be in for a drama about a relationship undermined by trust issues.

This isn’t the most exciting of prospects, but the actors might have made something of it. Lawrence, after all, is a proven talent, and seeing Pratt stretch himself beyond everyman affability might be interesting. I would have taken this over what the film delivers instead: a swift return to sci-fi priorities. A love story continues to play out, but it’s just an add-on to the hi-tech spectacles.

The starship starts to conk out, and risks must be taken. From here on, one thing that becomes all too clear is that the spacecraft, while it may be unreliable from the characters’ point of view, is a perfect piece of kit for the movie’s storytelling needs. It has been a helpful source of support all along. It’s a spacious, Enterprise-like vessel, and Jim and Aurora are never short of food and luxuries. There’s even a convenient robot for them to chat to — a human-looking barman, played with a finely judged hint of artificiality by Michael Sheen. He can’t help with their travel nightmare, but he allows the film a few extra dialogue scenes and even advances the plot at one crucial point.

As the story reaches its climax, though, the ship doesn’t just provide a few useful amenities, it takes care of everything. So the challenges it creates as it breaks down are precisely what’s required — every step of the way — to test Jim and Aurora and create a dramatic resolution.

With the plot so see-through, it’s just as well the film gives us plenty to look at. Visual-effects people may struggle these days to take our breath away with things we’ve never seen before — and there’s certainly nothing like that here — but good, ingenious design can still be pleasurable. The action sequences that dominate the movie’s final scenes are dynamic, and the starship is impressive from the beginning: it twirls its way through space, looking like a giant model of a double helix, and its interiors are full of stylish touches.

And, of course, Pratt and Lawrence look nice, too. It’s a shame this is pretty much all that’s required of them, but sometimes this is the job of a film star: selling us diverting but inconsequential movies.