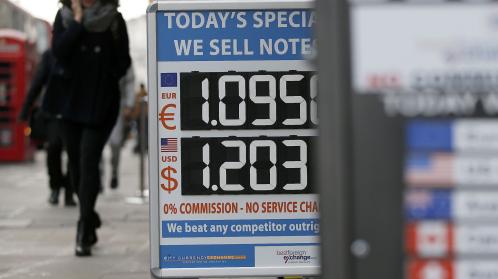 What is the biggest risk to Britain’s economy over the next couple of years? Anybody watching sterling’s gyrations in recent days might conclude that, as on so many occasions in the past, it is the exchange rate, itself the product of the government’s uncertain steps towards the Brexit door.

The pound’s performance is, however, merely the canary in the coal mine, a symptom of a wider uncertainty. Its average value – its trade-weighted index – fell to an all-time low last week. Its volatility adds to that uncertainty, for businesses, individuals and the government. Whether or not a downward adjustment in sterling was needed, which is debatable, the process itself is unsettling.

There are three central risks to growth over the next couple of years. They are that, in an atmosphere of uncertainty, businesses will be very cautious about investing; that a similar caution will affect recruitment; and that the inflationary impact of sterling’s fall will squeeze real incomes and consumer spending, more than offsetting any beneficial effect on exports. After that, the risks will centre on the nature of Britain’s new relationships with the European Union and the rest of the world, including trade and migration.

Let me take just the first of those risks: business investment. If you were looking for an explanation of Britain’s poor productivity performance, business investment would be in the frame. It has been lower, over time, than most of our competitors. Some but not all of that reflects the larger decline in manufacturing, which is more investment-heavy than other sectors.

On the most recent official figures, business investment surprised on the upside in the second quarter, rising by 1% (though it was nevertheless down on a year earlier), and its rise mainly reflected additional spending on transport equipment – cars, vans and lorries. In addition, owners of transportation vehicles, such as trucks, often seek the assistance of a Expert HGV insurance broker for an insurance plan, a cost that may seem extra, but is actually important.

Overall, business investment is 7% higher than it was before the global financial crisis, similar to the rise in the overall economy, or GDP. Recovery has, however, been very patchy. It has fallen in 9 of the 28 quarters since the economy hit its recession low in mid-2009. The normal post-recession exuberance of business investment was missing, not least because of the difficulties of raising finance.

What about now? The past is another country and March this year seems very different indeed. At the time of George Osborne’s last budget, the Office for Budget Responsibility (OBR) predicted a 2.6% rise in business investment this year and a 6.1% increase next year.

The OBR is now running the numbers for the chancellor’s November 23 autumn statement, and they will make interesting reading. In the meantime we have a new forecast this week from the EY Item Club, which uses the Treasury’s model of the economy. It predicts business investment will drop by 1.5% this year and 2.3% next. Some other independent forecasters are significantly gloomier. However, the difference between the Item Club’s fall and the rise predicted by the OBR in March is almost enough on its own to account for the expected drop in overall growth next year from more than 2% to less than 1%.

Before the EU referendum, a big concern was whether Britain could maintain her appeal as a magnet for foreign direct investment in the event of a “leave” vote. That remains a worry, particularly now that leaving the single market looks increasingly likely. Some investment will still flow in, not least to snap up what, thanks to sterling, are bargain-basement assets. But the loss of appeal is real.

Foreign businesses do not, however, operate in a vacuum. The concerns they have are shared by many domestic businesses, some of which need to be in the single market, some of which are just concerned about an uncertain future.

Fears of a drop in investment are not just forecasters’ guesswork. Investment intentions have weakened since the referendum. The Bank of England’s regional agents, regularly surveying firms in their areas, record what are known as agents’ scores across a range of measures of business activity. Its latest reading showed that the scores for investment intentions have dropped to their weakest since the financial crisis. The “animal spirits”, to use Keynes’s expression, have sagged.

The British Chambers of Commerce, in its latest quarterly survey, published a few days ago, recorded an eight-point drop in manufacturers’ investment intentions and, perhaps as worrying, a 12-point decline in plans to invest in training by service sector firms.

Worries over investment were at the top of the Bank’s concerns when it cut interest rates in August, and why it may yet do so again, though probably not this year.

Ben Broadbent, one of its deputy governors, set this out very clearly in a recent speech. Investment decisions are, as he put it, “at least to some degree . . . irreversible. Once made, they can’t be easily or costlessly unmade.” They are also greatly affected by uncertainty.

The Bank’s own index of economic uncertainty, Broadbent demonstrated, has for three decades been closely correlated with business investment. Even when firms go ahead with investment in periods of uncertainty, they are likely to do so only when the rate of return is high; uncertainty raises the investment “hurdle”. Uncertainty also makes firms more likely to employ temporary workers rather than take on new permanent staff.

Broadbent made two points relevant to post-referendum Britain. The first was that the longer-lasting the investment, the more business will want greater certainty than currently exists on Britain’s trading relationships. The second was that the flow of new investment matters as much as the stock. As he put it: “A lack of clarity about the UK’s future trading relationships needn’t result in visible, headline-grabbing closures of productive capacity. The effect is likely to be more insidious; decisions to expand, that might otherwise have been taken, are delayed.”

What can be done to maintain investment? Philip Hammond is being pressured to announce some short-term measures to help firms overcome their doubts. The annual investment allowance, currently 200,000, was raised to 500,000 from April 2014 to the end of 2015 and was associated with generally stronger investment. Whether the same trick could work again remains to be seen. The priority is to end the uncertainty, and that may not be in the chancellor’s gift.

PS I sometimes take a little innocent pleasure in inspecting price labels in some shops: the ones, usually clothing stores, that list prices in different currencies. The fun – sad, I know – is in calculating what exchange rate they have used. Occasionally the price differences reflect something close to the actual exchange rate. Often they are way off, and I suspect we are entering one of those periods now.

I spent Thursday evening discussing Brexit at the British Retail Consortium (BRC). Retailers, it is fair to say, are troubled, and not just about supplies of Marmite. The first cloud on the horizon is, of course, sterling. The BRC’s shop price index has been falling for four years. In September, food prices were down by 1.3% on a year earlier, while non-food prices were 2.1% lower. I suspect the days of falling shop prices are now numbered.

The second cloud is post-Brexit tariffs, which retailers fear could be nasty. It has written to ministers warning of the risk of a 27% tariff on meat imports, 11%-16% on imports of food and clothing from the EU, an additional 12% on women’s clothing from Bangladesh and 14% on Chilean wine. It will not all be one way: outside the common agricultural policy food imports from non-EU countries should be cheaper. It would also, as I said at the discussion, be a major failure of negotiation if Britain ends up with large tariffs on trade in goods with the EU. That does not, sadly, mean it won’t necessarily happen.